Victor Scheinman died at the age of 73 from a heart attack while visiting his brother in Northern California. Vic lived in Woodside, near Palo Alto, CA USA and in San Francisco, CA USA. 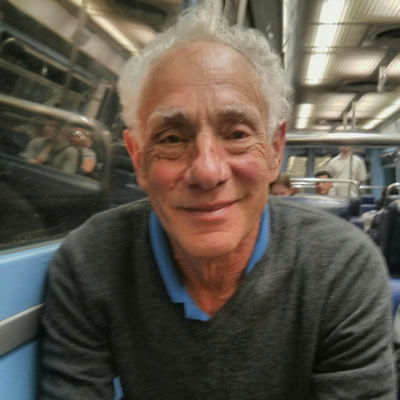 Vic graduated from MIT with a degree in Aero & Astro. He then entered Stanford as a graduate student in Mechanical Engineering and also spent a year in Belgium at the von Karmen Institute for Fluid Dynamics. After completing his Masters Degree he joined the Stanford Artificial Intelligence lab (SAIL) and enrolled for an Engineers Degree, which he completed in 1969. In connection with his Engineers Degree thesis he researched the idea of having a purely digital mechanical arm. This led to the "Orm" that was a prototype a pneumatically actuated multi-degree of freedom snake like arm. In addition, he was instrumental in modifying a Rancho Los Amigos exoskeleton arm for operation under computer control and he also participated in the design of a high-speed computer controlled humanoid hydraulic arm.

The main portion of his Engineers thesis dealt with the design of a six-degree-of-freedom computer controlled electric manipulator that he named The Stanford Arm. He then went on to produce over 10 copies of this Stanford Arm. It became the preferred research device in several university, government and industrial laboratories, and mathematical models of it were used as example in early robotics research papers and textbooks. This design is also deservedly referred to as "The Scheinman Stanford Robot Arm" or simply "The Scheinman Arm."

Vic then developed a six-axis force/torque sensing wrist that could be carried by the Scheinman Arm and other manipulators. This facilitated experiments in force control. He then returned briefly to MIT where he had been invited by Marvin Minsky to design a small humanoid arm for their AI Lab.

After returning to California, Vic started Vicarm, a company that produced copies of both his MIT design, which he named the Vicarm, and his Stanford arm. After several years his company was bought by Unimation, Inc. and was turned into the West Coast Division of Unimation. Vic's first new product, sponsored by General Motors through Unimation, was basically a scaled up industrial version of the Vicarm design. It was named the PUMA manipulator, and was well received both in academia and industry.

Victor left his company in 1980 to found the West Coast office of the computer vision company Automatix. After Vic left, Unimation was purchased by Westinghouse, and subsequently Brian Carlisle and Bruce Shimano, Vic's closest colleagues at Vicarm, arranged to reorganize Unimation's West Coast Division into Adept, Inc. For the rest of his life Vic remained close to and highly supportive of both Carlisle and Shimano.

At Automatix Vic invented Robot World. It was an entirely new concept for robotic use in manufacturing. He intended it to be used for circuit board assemble. Basically it was composed of multiple small manipulators magnetically suspended and free to move under computer control on an air cushion under an x-y table. Eventually Robot World was licensed for manufacture by the Japanese company Fujitsu.

After leaving Automatix Vic devoted his time to consulting and education. He coached design students in Stanford's Mechanical Engineering department and robotics labs. He was also active with High School students whom he mentored in connection with the First Robotics Competitions.

Vic received the Joseph F. Engelberger Award and also the ASME's Leonardo DaVinci Award for his work as a robot designer. Several of his manipulators are exhibited in the Smithsonian Museum in Washington, DC and the Computer History Museum in Mountain View, California. Vic was the consummate engineer. He kept extensive design notebooks, and his home shop was stocked with surplus hardware for electronic, computer and mechanical systems. He was totally a hands-on person, who did his own repairs and designs. He felt he could fix almost anything, and loved figuring out ways to solve problems. He always had a large number of projects going at the same time, and was very generous in providing his tools, parts, labor and expertise to his friends, colleagues and students. He will be greatly missed by the large community that he touched throughout his life with his dynamic personality and generous heart.