Seth Hutchinson will serve as RAS President Elect in 2018-2019. During the 6 October meeting in Madrid, Spain, the RAS Administrative Committee elected Hutchinson to serve as President Elect under President, Wolfram Burgard and to assume the Society presidency in January 2020. He is an IEEE Fellow and has served RAS on the Administrative Committee, as Editor-in-Chief of the IEEE Transactions on Robotics, as Editor-in-Chief of the ICRA Conference Editorial Board, and on numerous other RAS Committees and RAS Conferences. 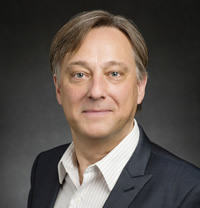 Seth Hutchinson is Professor and KUKA Chair for Robotics in the School of Interactive Computing at the Georgia Institute of Technology, where he also serves as Associate Director of the Institute for Robotics and Intelligent Machines. His research in robotics spans the areas of planning, sensing, and control. He has published more than 200 papers on these topics, and is coauthor of the books "Principles of Robot Motion: Theory, Algorithms, and Implementations," published by MIT Press, and "Robot Modeling and Control," published by Wiley. Hutchinson is an Emeritus Professor of Electrical and Computer Engineering at the University of Illinois at Urbana-Champaign, where he was Professor
of ECE until 2018, serving as Associate Head for Undergraduate Affairs from 2001 to 2007. He received his Ph.D. from Purdue University in 1988. Hutchinson is a Fellow of the IEEE.