There is growing need for robots that can interact safely with people in everyday situations. These robots have to be able to anticipate the effects of their own actions as well as the actions and needs of the people around them.

To achieve this, two streams of research need to merge, one concerned with physical systems specifically designed to interact with unconstrained environments and another focussing on control architectures that explicitly take into account the need to acquire and use experience.

The merging of these two areas has brought about the field of Cognitive Robotics. This is a multi-disciplinary science that draws on research in adaptive robotics as well as cognitive science and artificial intelligence, and often exploits models based on biological cognition.

Cognitive robots achieve their goals by perceiving their environment, paying attention to the events that matter, planning what to do, anticipating the outcome of their actions and the actions of other agents, and learning from the resultant interaction. They deal with the inherent uncertainty of natural environments by continually learning, reasoning, and sharing their knowledge. 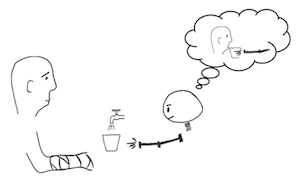 A key feature of cognitive robotics is its focus on predictive capabilities to augment immediate sensory-motor experience. Being able to view the world from someone else's perspective, a cognitive robot can anticipate that person's intended actions and needs. This applies both during direct interaction (e.g. a robot assisting a surgeon in theatre) and indirect interaction (e.g. a robot stacking shelves in a busy supermarket).

In cognitive robotics, the robot body is more than just a vehicle for physical manipulation or locomotion: it is a component of the cognitive process. Thus, cognitive robotics is a form of embodied cognition which exploits the robot's physical morphology, kinematics, and dynamics, as well as the environment in which it is operating, to achieve its key characteristic of adaptive anticipatory interaction.

The Technical Committee exists to foster links between the fields of robotics, cognitive science, and artificial intelligence. Our goal is to establish and promote the methodologies and tools required to make the field of cognitive robotics industrially and socially relevant.

As of December 2nd, 2022, the Technical Committee for Cognitive Robotics has 249 members, many of which are listed on the Members page.