Today's robots are adept at doing the same thing over and over very effectively and efficiently. However, when it comes to being agile enough to respond to varied and unpredictable needs, or having the flexibility to deal with unexpected or unforeseen circumstances, robots often struggle. While some newer robots focus on making teaching an easier task, getting most robots to perform even a simple task is very complex, so laborious and costly for the typical industrial robot that it is cost-effective only when needing to do so infrequently. Robots are used in many domains (e.g, manufacturing, medical, telecom) only to perform processes that are repeatable with little variation. As a consequence, creating new robotic applications for customized tasks becomes costly and time-consuming. This standard is intended to help stakeholders enable agility of robot systems and to develop the measurement science to assess and assure the agility performance of their robot systems. The scores for each of individual aspects of agility can be independently evaluated for the system as a whole. In this way, an end-user could pick and choose which aspects are most important to their implementation. Note that this standard is not intended to force robots to a particular configuration, but rather to nudge them towards this concept of agility.

The limited amount of agility that is typically built into robots usually relies on a predefined set of possible errors that could be experienced and a predefined set of plans that are executed when these errors occur. The same can be said for rapid retasking, where a preprogrammed set of plans is generated that a user can quickly switch between depending on the plan they want to perform. The standard focuses on the non-use of preprogrammed tasks or plans. Instead, based upon the perceived state of the world, known robot capabilities, and desired goal, the robot should be able to generate plans on its own. This allows for a more autonomous system in the face of errors that may not have been predicted.

This standard provides a listing of desirable traits of robotic systems under the umbrella of agility - a compound notion of reconfigurability and autonomy as opposed to the typical robotic use of rigid pre-programmed tasks. In particular, it describes a set of quantitative test methods and metrics for assessing the following ten aspects: hardware reconfigurability, software reconfigurability, communications, task representation, sensing, reasoning, perception, planning, tasking, and execution. 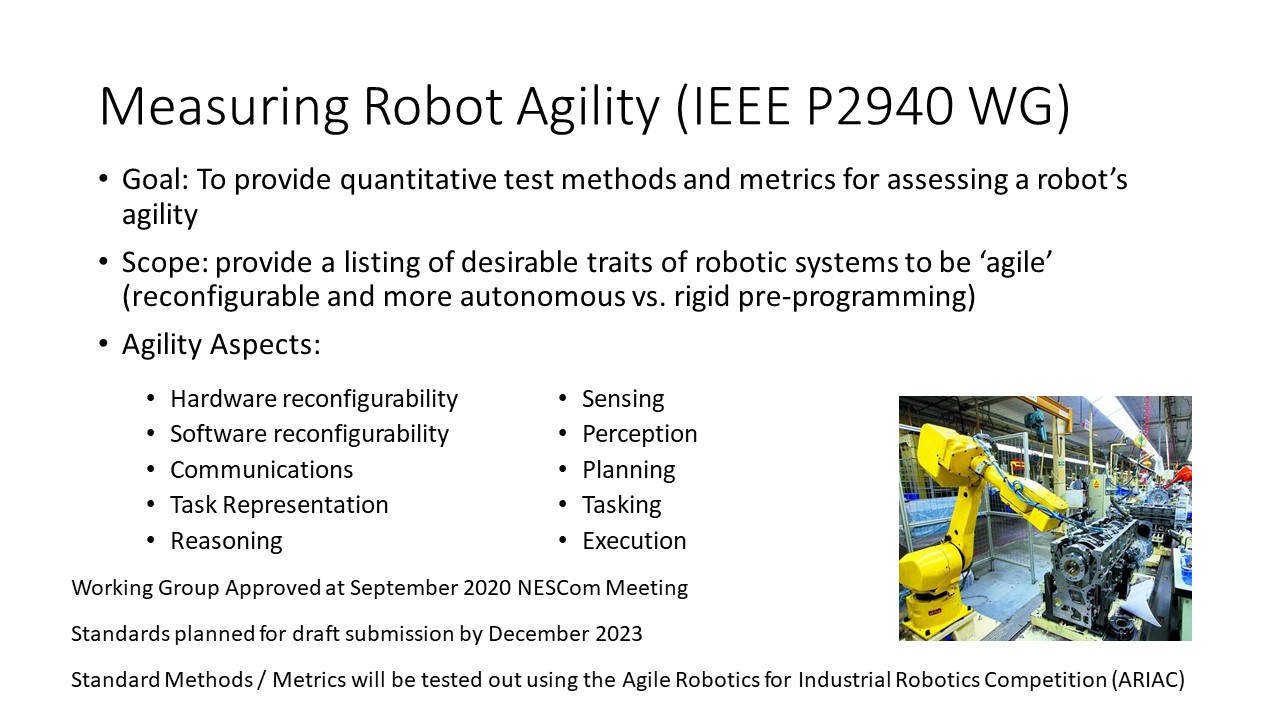