The 15th Innovation and Entrepreneurship Award in Robotics and Automation (IERA) goes to the “UVD Robot” by Blue Ocean Robotics. The collaborative robot autonomously drives around hospitals while emitting concentrated UV-C light to eliminate bacteria and other harmful microorganisms. As a result, hospitals can guarantee a 99.99% disinfection rate – reducing the risk for patients, staff and relatives of contracting dangerous infections.

“The UV disinfection robot by Blue Ocean Robotics shows that robotics has a limitless potential of being applied in new environments,” said Arturo Baroncelli, former President of the International Federation of Robotics which co-sponsors the IERA award. “The combination of ‘classical’ mechatronic disciplines - typical of robotics – with the know-how of medicine and pharmacy is fantastic evidence of this path of progress. The IFR is happy to recognise and support this virtual trend.”

“We are incredibly proud of winning the IERA Award 2019 for a ground-breaking product,” said Claus Risager, CEO of Blue Ocean Robotics. “Everyone can feel safe in rooms that have been disinfected by the robot. Our UVD Robot not only reduces the risk of patients contracting hospital-related infections, but also to a high extent visitors and hospital staff.” Blue Ocean Robotics is a Danish manufacturer of service robots for the healthcare, hospitality, construction and agricultural sectors based in Odense. The UV disinfection robot is sold by its subsidiary, UVD Robots.

Infections acquired in hospitals cause significant costs in the healthcare sector: In the EU, these costs amount to 7 billion euros. The source of infections can be other patients or staff and even equipment or the hospital environment. The UVD Robot drives around and positions itself autonomously in relation to its surroundings. The machine treats surfaces in a hospital ward with light from several angles and up close. The robot disinfects all contact surfaces, stopping at predefined hotspots that require a longer time of exposure. The UV disinfection robot does not replace the manual cleaning process - it is designed as a complimentary activity and always works in enclosed spaces. 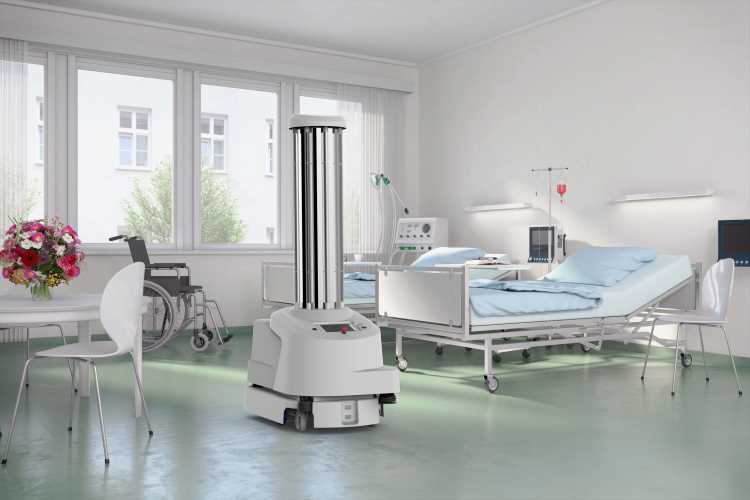 As exposure of UV-C light toward humans should be avoided, the robot contains a number of safety features: for example, a tablet which is placed on the door of the patient room acts as a motion sensor – it automatically disengages the UV-C light if someone wants to enter the room.

The technology has been developed in cooperation with leading hospitals in Scandinavia. First sales have been made in the Middle East and Asia. In future, the robot can also be applied to other environments requiring diligent disinfection such as food production or laboratories.

The IERA Award highlights and honors the achievements of innovators with value creating ideas and entrepreneurs who propel those ideas into world-class products. The IEEE Robotics and Automation Society (IEEE/RAS) and the International Federation of Robotics (IFR) jointly sponsor the award - underlining their determination to promote stronger collaboration between science and industry in robotics.