Heartfelt congratulations to Zexiang Li and Frank Wang, selected recipient of the prestigious 2019 IEEE Robotics and Automation Technical Field Award for "Contributions to the development and commercialization of civilian drones, aerial imaging technology, robotics engineering advancement, innovation, and entrepreneurship." They will receive this award during the 2019 IEEE International Conference on Robotics and Automation (ICRA) in Montreal, Canada on 20-24 May 2019. 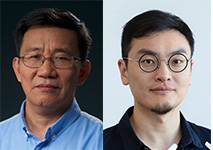 The aerial technology innovations of Zexiang Li and Frank Wang are fueling one of the most significant robotics developments of the past decade—the rise of the drone and its growing impact on society. Wang and Li were the first to dispel the stereotype that useful aerial robots were expensive and unwieldy, repositioning drones from luxurious toys to practical tools. They cofounded Da-Jiang Innovations (DJI), the world’s largest manufacturer and leader in consumer drones and aerial imaging technology. Their flight control systems have provided robotics researchers with platforms for research in visual navigation, collective robotics, simultaneous localization and mapping, and object detection and tracking. Among DJI’s many innovations are drones designed specifically for agricultural applications, autopilot drones for search and rescue, and camera stabilization technology that achieves movie-grade aerial footage for the motion-picture and film industry.

An IEEE Fellow, Zexiang Li is a professor with the Department of Electrical and Electronic Engineering at the Hong Kong University of Science and Technology, Clearwater Bay, Hong Kong, China.